Home > News & Blog > What does Fair Trade mean for the workers in our tuna factory?

What does Fair Trade mean for the workers in our tuna factory?

An interview with Meike Stella Batos

Meike works in the so-called “loining area”. This is where the white tuna fillet (loins) is separated from the red fish meat. She processes around 660 pounds of tuna per day. Together with her colleagues, they produce more than 80.000 pounds of tuna a day. The use of sharp knives, hydraulic machines, and conveyor belts makes the work on the factory floor not without danger. However, since the introduction of Fair Trade, awareness of worker safety has increased, as Meike has noticed.

“Wearing gloves is now mandatory for everyone in the filleting department. Another advantage is that my hands don’t age as quickly,” says Meike, proudly presenting her hands to the camera.

In addition, the factory floor has been given a non-slip coating. “Washing down fish and work materials means that the floor is wet the entire time. This has led to dangerous situations in the past, but since the new floor coating, the risk of slipping has decreased significantly.” 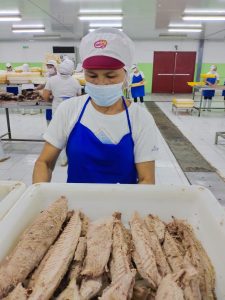 For Meike, the introduction of the “box” is the most significant change since the Fair Trade certification. Here, anyone can leave an anonymous message if they feel something is wrong. It could be a complaint about a lack of safety or inappropriate behavior by a manager. This procedure allows everyone to report a problem without fear of reprisals. Meike: “I know colleagues who have used this reporting system. And the great thing is that management has acted. This option gives me a sense of security.”

A workweek for Meike includes five full days and a half-day on Saturday. Since Fair Trade began, income has been tied to Indonesian law. “Salaries are now paid on time, and overtime is paid. At Christmas, I even get vacation pay, and if I’m sick, I get paid as usual.”

Meike now sees her colleagues as friends. She has known most of them for eight years, and now they even see each other outside of working hours. “Everything in life is discussed with each other, and that’s how time flies. Some women also run an online store from home, for example, with T-shirts, but that’s no longer an option for me. I prefer to spend my time at home with my children, at the beach, or church.” 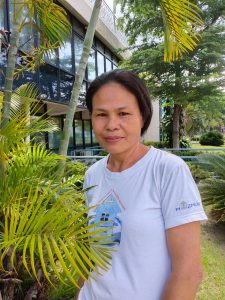 Meike’s highlight of each workday is lunch when employees can relax for an hour. The menu includes fried chicken, salted fish or beef stew with steamed rice, and a good spoonful of sambal. All colleagues agree that the food quality has improved a lot since the certification. But even the company chef can’t keep up with Meike’s cooking skills. Her favorite dish is Abon Ikan – a traditional dish with dried tuna, local herbs, and coconut milk. “I like to make this dish at home when we have a lot of guests. The community in Bitung is close and warm, so our house is always full on weekends.”

Meike has two daughters. The youngest, 19, just graduated from high school and now works in the same factory as her mother: in the dried fish department. The eldest is 23 and has almost completed her studies in aquaculture, or more precisely, fish farming.

In Indonesia, there is great potential for development in this regard. “On the one hand, I hope that my two daughters will have successful careers.  On the other hand, I shudder at the thought that they might move to the other side of the country. They’ve never been this far away from me.”

When asked if Meike has any dreams for her future, she replied: “Every year, I look forward to returning to the village where my family lives, about a three-hour bus ride from Bitung. Since getting the Fair Trade certification, a dream has already come true because I no longer have to worry about the future. But if I can dream, I would love to travel to America one day!”

The festive season has begun, and with Christmas around the corner we have some things to think about. We decorate…

Today, November 21 is World Fisheries Day! A day to recognize the importance of fisheries and all workers in the…

Sea Tales is on a mission! We want to fundamentally change the world of fish! In this report you can…